It was recently announced that Netflix has been in the process of both developing and testing the ability to insert targeted promotions within its programming and its got people quite excited. The reason being, is this the start of Netflix moving to an ad-funded model?

It is easy to see the potential attraction, its base of subscribers continues to grow, viewing levels are now on par with one of the larger (UK) TV channels, and with viewer data and profiles, the ability of the platform (sic) to insert the right ad to the right person is a potential game changer, what’s not to like?

However, as a content provider, Netflix is already successful and the trend is in a right place, it’s USP has always been an ad-free positioning, so why change that?  Well, of course, the reality might be a two or even three price point plan, potentially offering a subs free access for access with ads perhaps, whilst still providing an ad-free service to those that are happy to pay. A winner.

But let’s look at the numbers?

Latest BARB data suggests that Netflix continued its impressive growth in Q2 of this year, increasing subscriber households by over half a million, to now account for 9.7m households. That means Netflix is in 34% of all UK households, and they are paying (kerching). 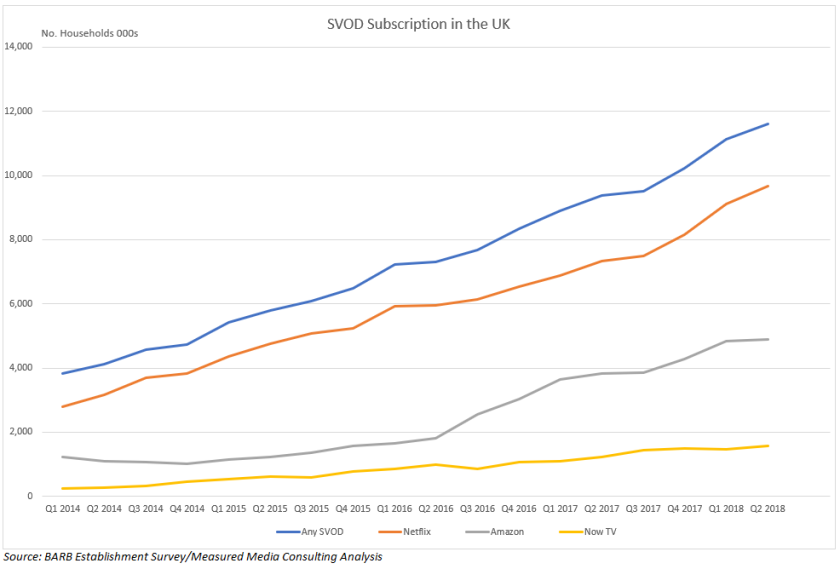 So, on the one hand there is plenty of scope for additional household penetration who may be happy to accept ads without having to pay, indeed, 66% of UK households dont have Netflix.

However, when we break this down by demographics, then the scope starts to look less attractive.  At the end of 2017 BARB estimated that just under 60% of 16-24s had access to Netflix in a subscribing household. Since then, Netflix has added an additional 1.5m subscribers, so some simple profile factoring and we can estimate that 60-65% of 16-24s already have access to Netflix.  As we know, this is a prime, attractive, advertising sub-demographic and they already have an ad-free Netflix access.  So, is the intention to just try and attract the remaining 35%? Maybe.   If so, then the proposition to planners becomes less attractive.  One of the biggest draws, and indeed drivers of effectiveness for TV is its mass reach brand building impact. So, if only 35% of your target audience is potentially available, then it’s less of a one stop shop, and now just one of many avenues in my marketing mix in which to place my campaign.  That’s not to say it will still not be a valuable channel for marketers, it is just not the ‘game changer’ some have made it out to be. The TV sales houses can sleep easy for now.

The other alternative of course is that Netflix takes a hit on actual subscribers in order to offer ads to clients. This is a dangerous game for any brand that has positioned itself not to accept advertising, and also one that is still doing relatively well to increase market share.  It would of course also be a big gamble, hoping the TV ad revenue would more than compensate for the lost subs. With decreasing linear TV viewing time, then there is scope, but its a risky business for sure.

Elsewhere, although Netflix continued its strong growth in Q2, Amazon Video was relatively unchanged, adding less than 100k subs in the quarter.  Now TV fared only marginally better with just over 100k additional subscribers in the quarter. 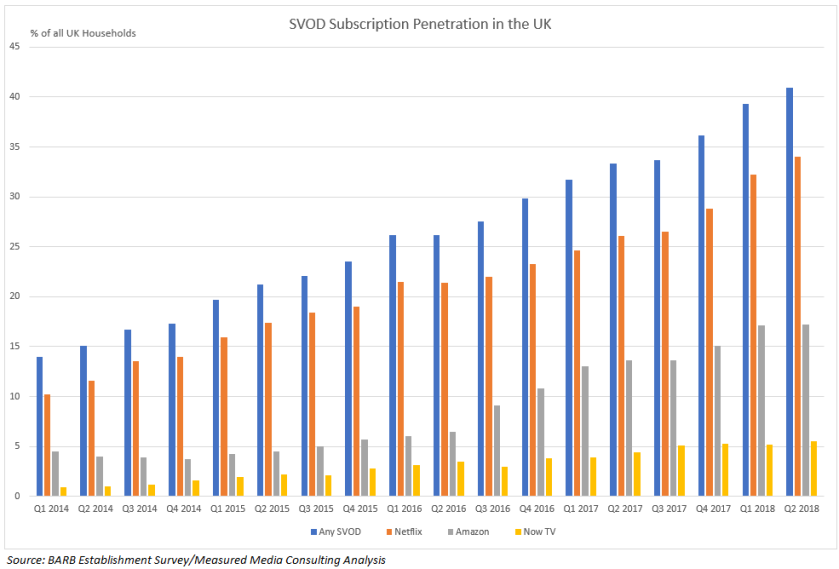 This means that across the three main services, Netflix, Amazon Video and Now TV, Netflix is now growing the strongest. Overall, UK households subscribing to an SVOD service increased by 22% in the year to June with 41% of UK households now having at least one of the three services. 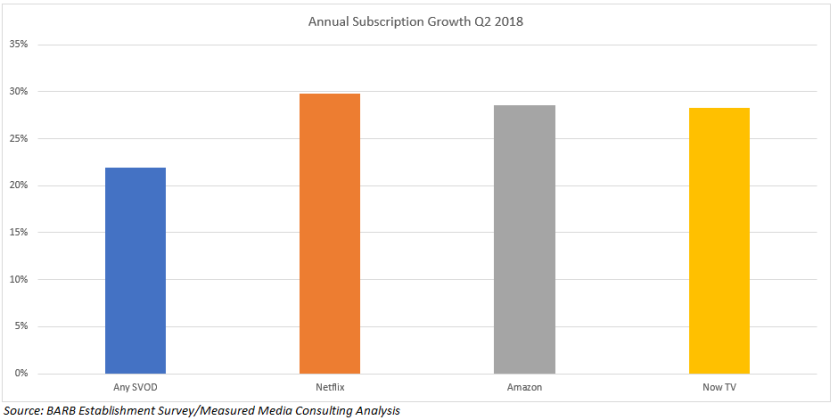 As for Netflix and their plans to introduce advertising, the next 12 months should prove very interesting and the devil will very much be in the detail.